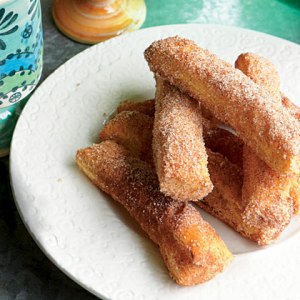 It was movie night, and the kids wanted something sweet. We had leftover puff pastry from making Avocado Puff Pastry a couple of weeks before, so I clicked on the Oven-Baked Churros pin on my Foodstuff — Sweet board and turned on the oven.

This recipe from MyRecipes.com, which originally came from Southern Living, really couldn’t be any easier. Cut the pastry into manageable strips and throw them on a lightly greased cookie sheet (I used my Silpat liner instead), and put them in the oven for 10 minutes at 450. While they’re baking, mix the sugar and cinnamon and melt your butter.

Not exactly authentic, but great for a quick dessert when you have teenagers in the house and extra puff pastry in the fridge. Rating: Teen-Approved, A Keeper